When Rumi was born and I was still dealing with some of my post-natal depression, I really worried about doing anything that would become a bad habit and cause us too much trouble later. So I tried hard to not let the milk bottle become a “habit”, not let her cradle become a “habit”, not let being picked up too much and held become a “habit” etc. etc. (I can only laugh at my paranoia now and I feel sure that if there ever is baby number two, I’ll be super relaxed with all of this. Bottle, cradle, it really matters not). And while I was too busy watching these habits ever so carefully, my baby got into the habit of sleeping with her thumb in her mouth and her comfort blanket in her hand. 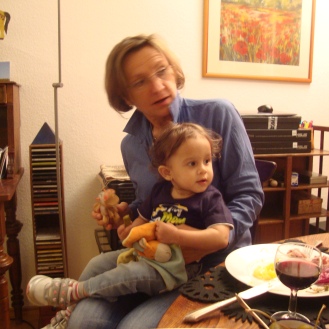 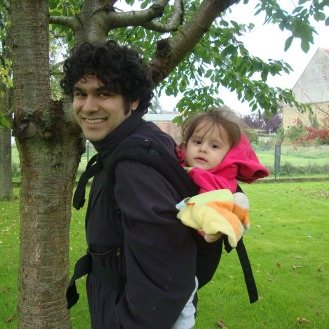 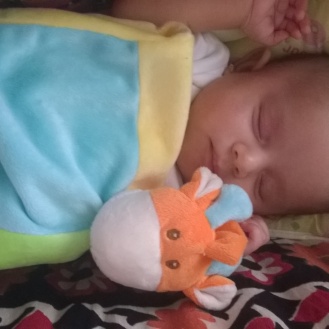 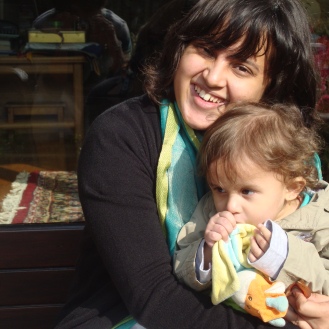 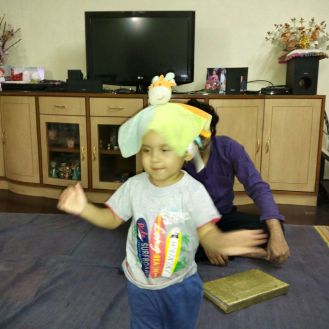 The thumb-sucking had been seen in ultrasounds while she was still in my womb and the comfort blanket that came all the way from the UK as a present from my darling Shwe, became a soft and wonderful accompaniment to the thumb that she could rub her nose and cheeks on, while she was blissfully sucking away. I even put it on my list of great buys for babies that made our life with Rumi so much easier. As she grew, Rumi grew more and more attached to it as an object that would soothe her and comfort her in times of distress and discomfort. We named her Matilda and it became a kind of code word that was known to everyone in the family. “Matilda? Have you got Matilda? Please take Matilda along. Where’s Matilda??!” After butchering the pretty Roald Dahl name multiple times, mum and MIL settled for “Matti” (like “mud or soil” in Telugu or our very Hyderabadi Hindi)

A few days ago, Matti was lost. We were spending the weekend with the family and Rumi went out with my brother and sister-in-law. They went up the Taljai hill and had a wonderful time (Rumi is at her happiest best with them). On the way back Rumi fell asleep. She came home in Sushant’s arms, he gently put her down on the bed for her afternoon nap. We first remembered Matilda when Rumi stirred in her sleep and I got up to look for her beloved sleep companion. “Where’s Matti?” Smita got up to look. She went to the car to check. None of us thought about loss right away; didn’t we always check and double-check for her? She was obviously around somewhere. Not found in the car. MIL went out and looked. Nothing. That’s when the thought first occurred to all of us: left behind somewhere, dropped on the streets?

I didn’t worry about it right away, my cousin had once sent me a picture of an identical comfort blanket and we had joked that we should buy it as a backup plan. I was pretty sure I could find somebody in the States or the UK to ship it to us. While I checked my contact list and pinged everyone I could think of, Sushant and Smita rushed  back to the spot they had been to earlier and my MIL combed the house. After several hours, our optimism had dwindled considerably. Matilda had not been found. We felt sure that one of the many other kids playing on the hill that afternoon had picked her up. And I had not found anything that could be purchased in India or from India right away (never, ever have I cursed Amazon.in so much).

That particular comfort blanket had come from Primark (no online stores dammit!) but I found a used one on Ebay. A few frantic, pleading messages (the kind that don’t make you feel good later on, but this was not about me, it was about my baby!) and ordered it to a cousin whose mum was visiting and could bring it on the first. Minor problem averted, we had an identical comfort object. Major problem; bedtime was nearing, Rumi would need it and the first of September was 15 days away.

My MIL tried her hand at making something makeshift. Four things stood in the way: she did not have the required material, no fabric in the required colour, not much experience in tailoring and only a vague recollection of how Matilda exactly looked. Problem much? Not for Aai who is the most undeterred, unfazed person I know and deals with problems like a solid boulder despite her meek and gentle demeanor. Out came a red, sari-blouse looking fabric and sewing needles. Half an hour later, the finished product looked like this: 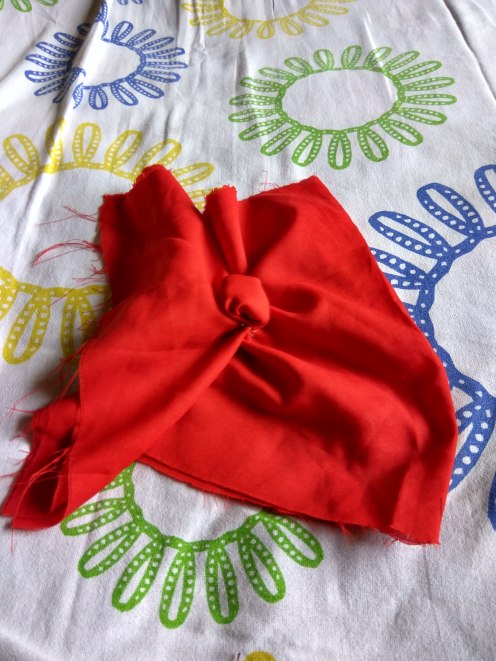 I felt like I wanted to cry a little but also laugh some because I was so moved and touched by the gesture but a voice in my mind was constantly saying “there’s no way she’s going to fall for that”. Three hours of burying my nose in my phone with keyword “comfort blanket” had left me with a headache and I was dreading  the night. My husband and I went upstairs to discuss what to tell Rumi. How do you tell a child that something beloved is lost? We luckily had something identical on the way so we just had to get through a few days. “She’s at the laundry coz she needed to be washed” was the best we could come up with. Rumi didn’t cry right away. But as her lids grew heavy, she started begging me for Matti. We tried stroking her, cuddling her, telling her stories. The poor girl could not even take her thumb in her mouth without her beloved Matilda in her hands. She started crying. We gave her another soft blanket. Kicking and a temper tantrum. “I want Matilda!”

It was really one of the worst nights we had ever experienced with Rumi. No injection, no colic had ever brought on such heart-wrenching cries and sobs. She would get exhausted and fall asleep only to wake up and beg me for Matilda again. She was so incoherent and disturbed that it was impossible to reason with her. I went into the bathroom and cried my eyes out because I could not bear to see her like that anymore.

I tried to reason with myself that she would forget about it soon. Probably her thumb-sucking would come to an end too, which was a good thing. Also, losing an object was just the beginning of so many losses, little and big which she would have to face in her life. I would just have to learn to see my child through all her pains and hurts and heartbreaks without breaking down myself. Nobody slept that night. My MIL came up to our bedroom when Rumi’s cries became shrill and insistent. My brother and sister-in-law were awake and standing at the door of the bedroom in concern.

Everybody woke up unhappy and crestfallen. My sister-in-law who loves Rumi very very dearly actually teared up when she heard how bad the night had been. Rumi was the only one who was cheerful and upbeat; bedtime was behind her and Matilda forgotten, until the next nap. I marveled at her resilience and happy nature but decided then and there that we could not go on like this for two weeks. I decided to ask for help on Facebook and all the other groups and forums I knew. How powerful social media really is! I have never really marveled at the power of the World Wide Web so much until now. Everything is literally a click away. So many kind people responded and a dear, old friend helped us find something that she could send in four days with her mother. It wasn’t Matilda but a similar-looking lavender giraffe that we were sure would do till Matti came back all clean from the laundry. But even this giraffe was four whole days and five whole nights away. Unable to do nothing till then, we decided to head for the mall. Surely we would find something in Mothercare or Hamleys. Or we could request them to order for us.

We set out with heavy heads but determined hearts. Halfway there, Abhi’s phone rang and it was my sister-in-law. We were at the petrol pump and cut the call but then she called mine. Then his. Then mine again until we answered and she said “We’ve found Matilda!” I could not believe it. “Where was she?” And the surprising answer. Matilda showed up on an empty grassy plot next to our bungalow. My brother-in-law stepped out and there she was. Perched on a grassy, hilly patch in an empty plot, with that smile on her face, as if she had decided to take a walk in the sun and then sit in the grass to rest her weary fit and sun herself. As if she was saying “I was right next door, why are you flipping out?”

What a miracle! I slumped on the seat in relief and my husband and I could not stop laughing all the way home. We found explanations for it; Matilda slipped out of Rumi’s hand when they got out of the car, the dogs found it, played with it and left it in the plot. But to me, it was as big a miracle and an answer to my prayers as I could hope for in my life: that she was completely unscathed and had no teeth marks, rips anywhere, that she ended up in a plot next to our house, that Sushant spotted her in all that grass and shrubbery.

For the rest of my life I will get goosebumps when I think of this “miracle” that happened to us. And I learned some important things about myself: I will stop at nothing when it comes to my children; I was literally poised to swap my credit card and fly to London for a blankie and that I must contain my emotions better and not breakdown, as there are many twists and turns that are waiting for us round the corner and I need to be calm and grounded if I want my baby to emulate me and learn to deal with whatever comes her way.

Meanwhile, bedtimes have gone back to being happy and cuddly, the thumb is back in the mouth and I refuse to worry about that habit anymore.