For a while now, my husband and I have been toying with the idea of a second baby. We would both love to have another child, but our finances are the main concern. Will we be able to raise and educate and save for another child? Parents with two kids have assured us that it all works out and I am sure it does. But what about an Education Fund, and all those Benefits and Policies? Are we in a position to do that a second time over?

After becoming a parent, I have been thinking a lot about what we are going to be able to give Rumi. As clichéd as it might sound, I have been trying to be a better person ever since she came into our lives because her big, wide eyes watch me constantly and she tries to do every little thing the way I do it. That will soon change with school, where the teacher becomes the new role model but I read that the way we talk to our children becomes their inner voice, and I know it to be true because the approving cheering voice and the negative critical voice in my head both belong to my Mom. But are we going to be able to save enough for her to really pursue her dreams? What sort of legacy will we have for her? I am naturally talking about Money; that Fickle Friend, that Playmate of the Wise, that one thing everyone wishes they had more of.

Sometimes when my friend Shwe comes over and we start drinking and checking Facebook to stalk and laugh at people, we invariably pause on people in beautiful locations abroad. I sigh with longing and Shwe snorts and proceeds to tell me some inside gossip about the people in the picture. The conversation invariably goes like this: “Oh wow Shwe they are in Dubai / Bali / Santorini  again! What do these people do? When do they work?” “Arre kuch nahi re, father’s a ‘rich buck’!” Then we move away from the pictures and joke about our parents and wish that they were ‘rich bucks’ too. 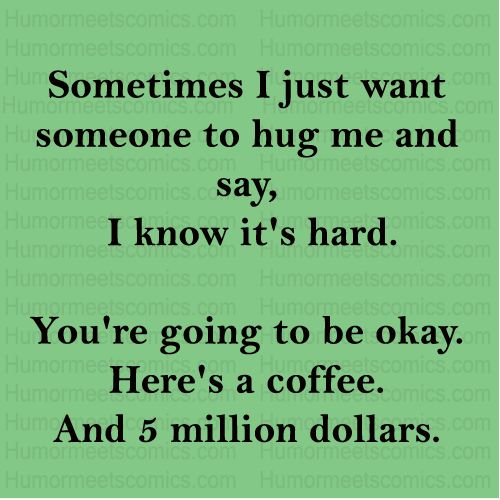 This picture sums up our talks perfectly. We wish and wish for those 5 million dollars in the bank so that we may go out and pursue all our dreams. In my sober moments, I understand how grossly I am underestimating the hard work of people who do come from ‘more financially secure’ or wealthier backgrounds and also the pressures and expectations that it may come with.

But I still cannot completely stop wishing that I could just show Abba a brilliant business plan and that he could just write a cheque. Sometimes when I daydream about writing a bestseller, I wish Abbu had a publishing house. On other days, I make him an Angel Investor.  Every time I have a new idea, I act like the only thing that is standing between me and a multi-million rupee business is the initial capital. This then becomes an excuse to not work hard on the idea and get creative, but to sit around with a long face and say “I would have done it, if we had the money!” (I am always reminded of one of Abhi’s favorite lines from the hilarious Marathi movie Dhoom Dhadaka, where the supremely funny Laxmikant Berde intends to become a famous director. He says “Mi ek picture banavtoe, fakta story ani finance baki e”: All that is stopping me from making a Blockbuster is the lack of a story and finance)

Luckily, this time I was able to work through my issues and I now find myself on the cusp of doing something that excites me tremendously. There is still a long way to go but work has begun in earnest. During this fun phase, I suddenly found myself getting cold feet. What if my ideas aren’t as fantastic as I think they are? What if it all fails and results in supreme humiliation? So far, a lack of funds had been an excuse for thinking it would have all worked out otherwise. Now I know that there is no guarantee and it scares me. But having passed through these cycles with so many unfinished, half-baked ideas before, I start doing something that relaxes me more than prayer; I open up an old album and sift through family photographs.

Since photo printing was the family livelihood growing up, we have a plethora of wonderful snaps documenting every single childhood memory. I find older snaps of Abbu and Bade Chacha and laugh at the long hair and open-chested shirts. Looking at these pictures takes me back to the story of my family’s humble beginnings. I have always thought that the story of how my Grandfather started in Pune is worth writing a book or making a film on and I would love to do it in detail someday but the gist of it is here:

My Grandfather and Grandma lived in a small, tiny room with their four kids (They had lost their oldest baby, as was common in those days). I can hardly imagine that kind of poverty but they sometimes subsisted on two bananas between all of them or a watery dal eaten with stale bread. My own father has actually sold Potato Wadas in Kamla Nehru Park that my Phuppi and Dadi would make at home. When money for school books or uniforms was scarce, a kind Rickshaw driver called Kumar Chacha would pitch in (he is still part of our lives and our generation knows him as Kumar Dadaji). When my Grandfather had the brainwave to get into Photo Printing, he started doing it with Dadi’s help in a small corner of the house (Weren’t the women in those days just so stellar?). My Bade Chacha used to walk all over the city to ‘collect’ work and then to deliver it.

From those humble living quarters was born Apex, a color lab that has brought wealth and abundance to the family. From the ‘have-nots’, we became the ‘haves’. Growing up, we had every sort of luxury and I would never have imagined how it all came to be till my dad once told me this story in his quiet manner. From then on, it became my favorite story till I grew enough to realize that it was not just a ‘story’ but the life trajectory of my Abba, who had dreamt of becoming a Doctor or Engineer but had to join the family business instead. From then on, I could never listen to The Story without crying. My family’s pains became my pains, their hurts and sacrifices and scars became mine.

Even now, I cannot write this without goosebumps on my arms and tears in my eyes. This is the blood that flows through me. This is what I come from. It makes me so proud. And so determined to work hard and to persevere and to just laugh at my tiny, petty fears and say to them “Just get lost! If my Chacha could walk through the city every night and my Abbu could sell snacks in the park and achieve everything they did, then what is this silly fuss over failure?”

And then I know that this grit and gumption is what I will leave behind for Rumi. I will leave behind the generosity of spirit: even if there is only one banana for dinner, there is always enough to spare for the dog and the cat and the optimism and ability to feel that the world is beautiful, even if people treated you unkindly when you did not have enough.

I remembered all of this when I decluttered for Diwali two weeks back. I opened a carton and there it was: my Dadaji’s legacy for me. There were cartons and cartons of it, covered carefully in plastic and smelling of vanilla and almonds. And that is the legacy I have and will leave behind for Rumi.